For Dr. Chris Mulder ’80, community is central to everything he does. An eighth-generation South African, Mulder not only feels a deep connection to the Aggie community where he received his doctorate in environmental design, but also promotes community in South Africa through his business, CMAI Architects. The firm, which offers architecture, urban design, landscape architecture, environmental planning and property development services, focuses on harmonizing the human world with nature.

“My passion is creating livable places in the style of old-fashioned, rural villages but in a contemporary way that is sensitive to the environment,” Mulder said.

This philosophy, known as New Ruralism, has its roots in Mulder’s early experiences as a farmer. “I learned to read the land, an ability I think a lot of people have lost,” Mulder explained. “Africa has an abundance of open land that can be developed sustainably and responsibly, but we must accommodate the large rural population.”

Mulder’s latest project under this vision is Crossways Farm Village, South Africa’s first New Rural village. Located on a 1,285-acre dairy farm, the village is based on a design model in which neighborhoods radiate from a village center of shops, restaurants and support services.

The village encourages sustainable living and allows its residents to experience tight-knit community values. “It’s about revisiting traditionally agrarian values where society prioritizes hard work and helping their neighbors,” explained Robert Fox ’16, development project manager for Crossways. “I think those values and the lure of living close to the land is why Crossways and New Ruralism in general will be successful and lead to an international movement, especially post COVID-19.”

The project began in 2010, but with a planned capacity of 700 homes, it is a long-term endeavor. “It’s a huge project with such diversity,” Mulder said.

Mulder has previously received numerous awards for his Thesen Islands project, a coastal town of 19 man-made islands and canals located in the Knysna estuary of South Africa. A 15-year enterprise, the project has been recognized for protecting the sensitive ecosystem and facilitating marine diversity.

Improving the locals’ quality of life is as important for Mulder as benefiting the environment. Motivated by South Africa’s 30% unemployment rate, he employs labor-intensive development that creates jobs for local laborers and artisans. “That’s an impact Chris has had on the world that most people don’t recognize, but it’s hugely impactful to the South Africans he’s worked with,” Fox said.

Supporting Aggies is another valuable cause for Mulder, who said Texas A&M University has been extremely influential for him, his wife, Patricia ’80, and their four children. “It was a life-changing experience for us,” he recalled. “I enjoyed everything about it, especially the people. We made friends that we still visit today.”

Inspired by his experiences, Mulder has hired many Aggies like Fox and has also helped five South African students attend Texas A&M, an opportunity that allowed them to open their own businesses. “Giving these students the ability to open their own professional firms brings me great satisfaction,” he said. Mulder and his team also regularly lend their expertise to the College of Architecture, expanding the college’s multidisciplinary expertise and enhancing the future of Texas’ built environment.

For Fox, Mulder is not just an employer but a role model. “He’s the most genuine person I’ve ever met,” he added. “Everything he does is because he cares. He’s a visionary who knows that his projects can change the world—and they are.”

Make a Donation: Interested in helping future community builders like Dr. Mulder? Support undergraduate and graduate students in the College of Architecture by giving to its scholarship fund at give.am/ARCHScholarships or by contacting Larry Zuber at lzuber@txamfoundation.com or (979) 845-0939.

As founder and director of CMAI Architects, Dr. Mulder has led numerous property development projects in South Africa and lectured throughout the world on sustainable property development. In 2009, South Africa’s Institute for Landscape Architecture named him an icon of the profession in recognition of his efforts to improve the quality of life and environment in his country. Texas A&M’s College of Architecture honored him as an Outstanding Alumnus in 2002, while The Association of Former Students awarded him the Outstanding International Alumnus Award in 2011. 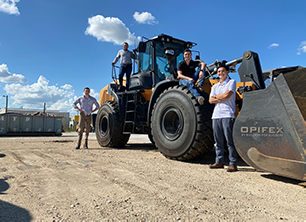