Out of the Woods

Former National Park Service Deputy Director David Vela ’82 reflects on the trip that inspired his career and Texas A&M’s influence on his life.

From Yellowstone’s iridescent caldera and the Grand Canyon’s sculpted valleys to Big Bend’s wild magenta sunsets, America’s national parks have wowed generations of visitors. As the National Park Service (NPS) prepares to reopen after temporarily closing parks in the spring, recently retired Deputy Director David Vela ’82 reflects on the path that led him to the NPS and his deep-rooted ties to Texas A&M.

Describe your duties as deputy director, exercising the authority of the director, of the National Park Service.

My duties were the same as they would be had I been confirmed by the U.S. Senate as the 19th director. I administered the day-to-day affairs of the NPS, which included managing a budget of nearly $3 billion with 20,000 employees and 419 units across every state and territory to preserve the nation’s most special places and the stories they contain.

What inspired you to pursue a career in conservation?

Back in the late ’60s or early ’70s, during my late teens, my family took a trip to Yellowstone National Park. As a Latino family living in rural Wharton, Texas, we had never even heard of national parks.

On the way to Yellowstone, we stopped at Grand Teton National Park. Not only was it my first time seeing a national park, with its amazing landscape and moose and grizzlies, but it was also the first time I saw a national park ranger wearing that iconic uniform and Stetson hat. I knew that one day, I would proudly wear that uniform and protect these special places. Many decades later, I served as superintendent of the very first park that changed my life.

Texas A&M continues to play a very important role in my life, both personally and professionally. Aggie values and traditions are very important to me and my family.

During my confirmation hearing to be director, I asked my parents why we made that life-changing trip. My dad said he had heard his coworkers talking about their trips to Yellowstone and wanted to share that same experience with his kids. That trip both inspired and resulted in a 30-year career serving and protecting our nation’s most special places.

What brought you to Texas A&M University?

My high school sweetheart, Melissa ’82, attended Texas A&M to pursue an accounting degree. After I graduated from Wharton County Junior College with an associate degree, we got married and I transferred to Texas A&M to be with her.

It was only when I arrived on campus that I learned how special and renowned the Recreation, Parks and Tourism Sciences (RPTS) program was. I made friends with my professors, many of whom are still teaching the next generation and continue to support me throughout my career.

How has Texas A&M influenced your life and career?

Texas A&M continues to play a very important role in my life, both personally and professionally. Aggie values and traditions are very important to me and my family. Our daughter, Christina ’06, and son, Anthony ’10, both graduated from Texas A&M with degrees in sport management. Anthony walked on the football team as a fullback and was a three-year letterman earning a scholarship his senior year. He is now following in my footsteps as a chief law enforcement park ranger. My wife, Melissa, recently retired from the airline industry, while Christina works in the education field in College Station.

As for how Texas A&M has influenced my professional life, I can’t tell you how many Aggies I’ve hired during my career, but it’s a lot. When I see an Aggie applicant, I know what I’m getting: a disciplined, respectful and professional candidate. In fact, the NPS has a program called ProRanger, established to recruit and train seasonal law enforcement park rangers, headquartered at Texas A&M. So, I’ve been able to maintain a direct connection with Aggieland in helping to build the next generation of park rangers and leaders not only for the NPS, but also for the global park community.

Make A Donation: Are you passionate about helping future Aggies make a difference in the field of Recreation, Parks and Tourism Sciences? You can support the department by giving to its excellence fund at give.am/RPTSExcellence or by contacting Allyson Tjoelker ’02 at atjoelker@txamfoundation.com or (979) 458-7929.

David Vela ’82 retired from his position as deputy director, exercising the authority of the director, of the National Park Service in August 2020. Before his tenure as deputy director, Vela was superintendent of Grand Teton National Park and the John D. Rockefeller, Jr. Memorial Parkway; NPS director for workforce, relevancy and inclusion in its Washington headquarters; director of the agency’s southeast region; and superintendent at three NPS parks. In addition to his conservation work, Vela has worked in a variety of public service posts outside the NPS at the state and federal level.

Guardian of the GalaxyRead more

From Farm to TableRead more 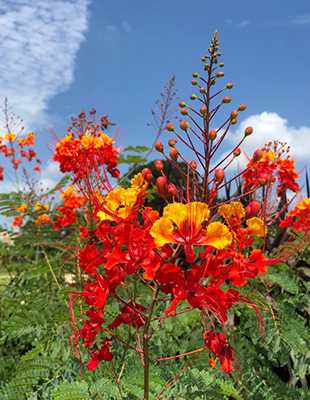